Another One For Stevie

The Returnables are a mix of Island rock ‘n’ roll veterans who reunited in 2019 after a 30-year hiatus… and discovered they were having too much fun to stop this time. Please join The Returnables – Frank Gotwals (guitar); Hank Whitsett (keys); Burt Leach (drums); Tom Gotwals (trumpet); Eric Beckman (bass); Brian Robbins (guitar) – on Sunday, August 7th, when they return to pay tribute to their late leader and brother Steve Robbins Jr… Returnables style.

Make a donation to support the Bud Carter Music Scholarship Fund. The suggested donation to attend the concert is $10. 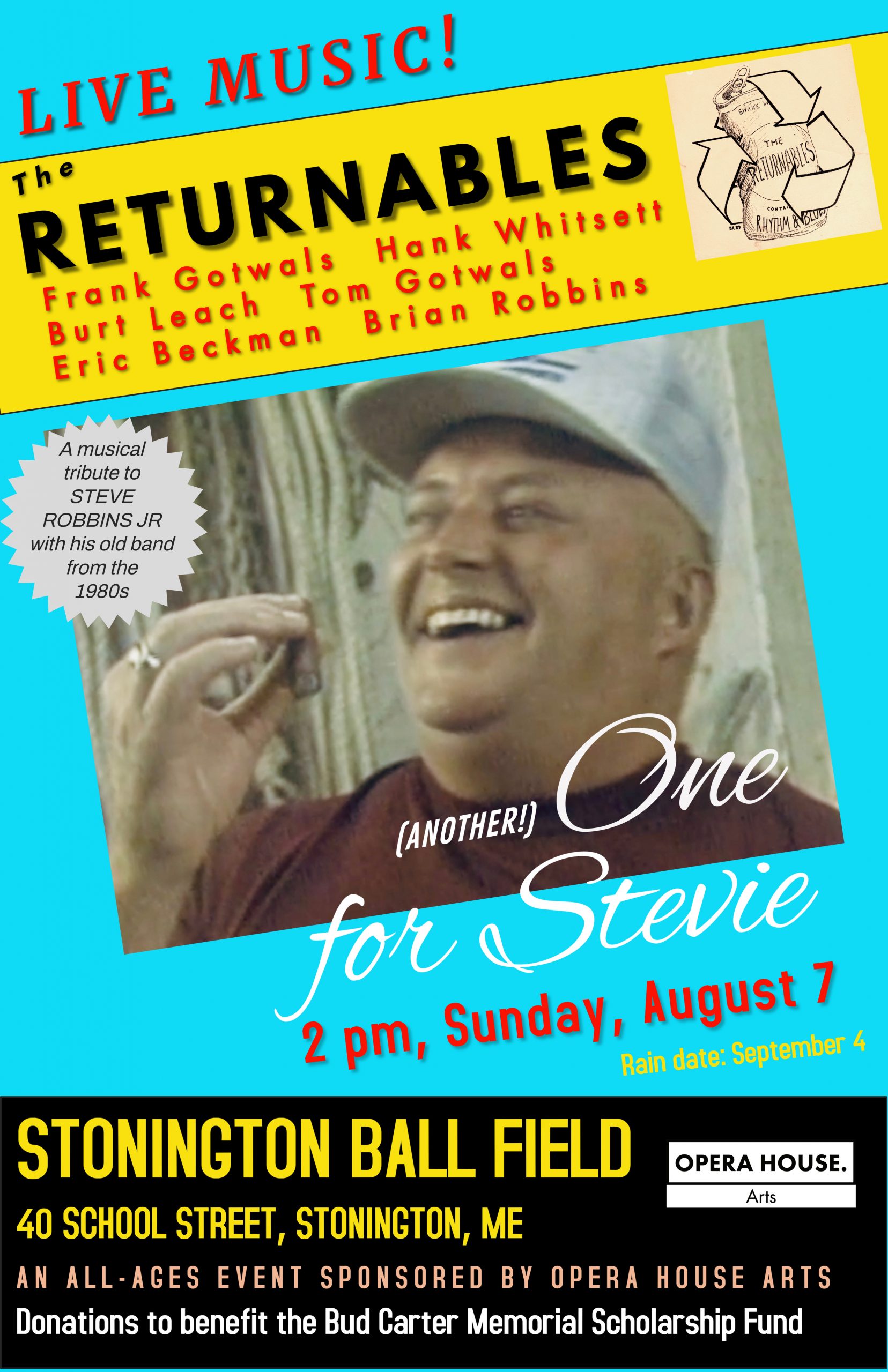 Back in the 1980s there was a group of Deer Isle/Stonington-based musicians who would get together once a year to make music during the Island’s annual 4th of July parade. No matter who was on hand in any given year, the ensemble’s heart and soul was Steve Robbins Jr. He led the band with his energy and humor as much as his faithful Martin guitar, powerful voice, and ever-present cigar.

The band’s name changed each year to tie in with either the parade theme or current events. One 4th they were Clam Fritters & The Flats (to honor Island seafood); Jacques Strapp & The Sweat Band made an appearance during the Summer Olympics… and in 1989 – the year of the 5-cent deposit referendum – they were Bottle Bill & The Returnables.

That year, the band’s momentum carried them beyond the parade; they played on the Stonington Town Pier that night (going a couple of hours past the 9 PM fireworks) and blistered through raucous gigs that summer and all, including a visit to Swans Island and a string of fuse-blowing Legion Hall dances before calling it quits by year’s end.

In 2019, The Returnables reunited to mark the 50th anniversary of Woodstock as well as the band’s 30th anniversary. Sadly, they had to perform without Steve, who was undergoing treatments for cancer (while still lobstering steadily).

Steve Robbins Jr. passed away in July of 2020. In August of 2021, his bandmates played “One For Stevie” – an outdoor concert at the Stonington Ball Field – in his honor.

And this August 7th… they’re going to do it again!