TITLE: SEE SHAKESPEARE’S MUCH ADO ABOUT NOTHING OUTDOORS IN DEER ISLE – JUNE 29 THROUGH JULY 17

Stonington, Maine – Opera House Arts is pleased to present William Shakespeare’s play, Much Ado About Nothing, June 29 through July 17 at 5:30pm. Directed by Emma Rosa Went, this play is being performed outdoors at Mariners Memorial Park in Deer Isle, continuing the Opera House Arts tradition of inventive, site-specific theater. The production includes dance choreographed by Molly Gawler and live music by folk composer Ray Duncan. With its themes of redemption and collective growth, the production celebrates our abiding love for one another and shared connection even through trying times. Performances are held up to five days a week, weather permitting, and seating limited to 75 per show, general admission. Purchase tickets at operahousearts.org.

“Much Ado About Nothing is Shakespeare’s boisterous, big-hearted comedy about the battle lines of romance, the transforming power of forgiveness, and the (ultimate) surrender to love,” said Emma Rosa Went, a director from New York who has family ties to Hancock County Maine. “The setting of the production in a mid-1800s working waterfront community is a beautiful compliment to Deer Isle and the history of Mariners Memorial Park itself. It also underscores the play’s themes about gender and a society that’s healing from a conflict,” said Cait Robinson, Artistic Director at Opera House Arts. The rural outdoor setting of the play near the water, with period costumes and original folk songs including guitar and fiddle, gives the play a classic Americana feel.

The cast is one of the most geographically diverse that Opera House Arts has ever had, including actors from Texas, New York, Boston, Los Angeles, and India. Three of the actors have performed previously with Opera House Arts: Hannah Daly, Esther Williamson, and Peter Richards, who also serves on Opera House Arts Board of Directors. “Getting people from diverse perspectives and communities to perform with us brings extra depth to the performance,” said Cait Robinson, Artistic Director at Opera House Arts. “The play is a collective coming of age, both about young people growing up and older adults becoming better versions of themselves. It’s especially fun to watch with a cast this funny and inventive.” Cast members include: Paul Bernardo, Hannah Daly, Sam C. Jones, Ram Kanneganti, Ty Lane, Erin Noll, Keith Michael Pinault, Joseph Quintana, Peter Richards, and Esther Williamson.

Play synopsis: The boys are back from fighting, and now the ‘merry war’ begins – when Don Pedro and his soldiers return to Leonato’s house, old sparring-partners Beatrice and Benedick are reunited and the party can finally start. But while friends and family scheme to bring them closer to the altar, another plot is being laid that will test the community, reforge alliances, and rewrite what men and women think they know about each other.

Mariners Memorial Park is named for the brave men of the Island who lost their lives at sea and has beautiful gardens and gentle paths circling fields and leading down to the shore of Long Cove. A broad upland meadow fringed with woods stretches from the park’s entrance to the shore.  It is in this meadow where the performance will take place. Opera House Arts thanks the Evergreen Garden Club and the Island Heritage Trust for their partnership in this outdoor production.

Cutline: Cast members of Shakespeare’s Much Ado About Nothing, produced by Opera House Arts, rehearse at the performance location in Mariners Memorial Park, Deer Isle with Sam C. Jones on guitar and Joseph Quintana on fiddle, performing original folk music compositions by Ray Duncan. The play runs from June 29 through July 17. Tickets at operahousearts.org. 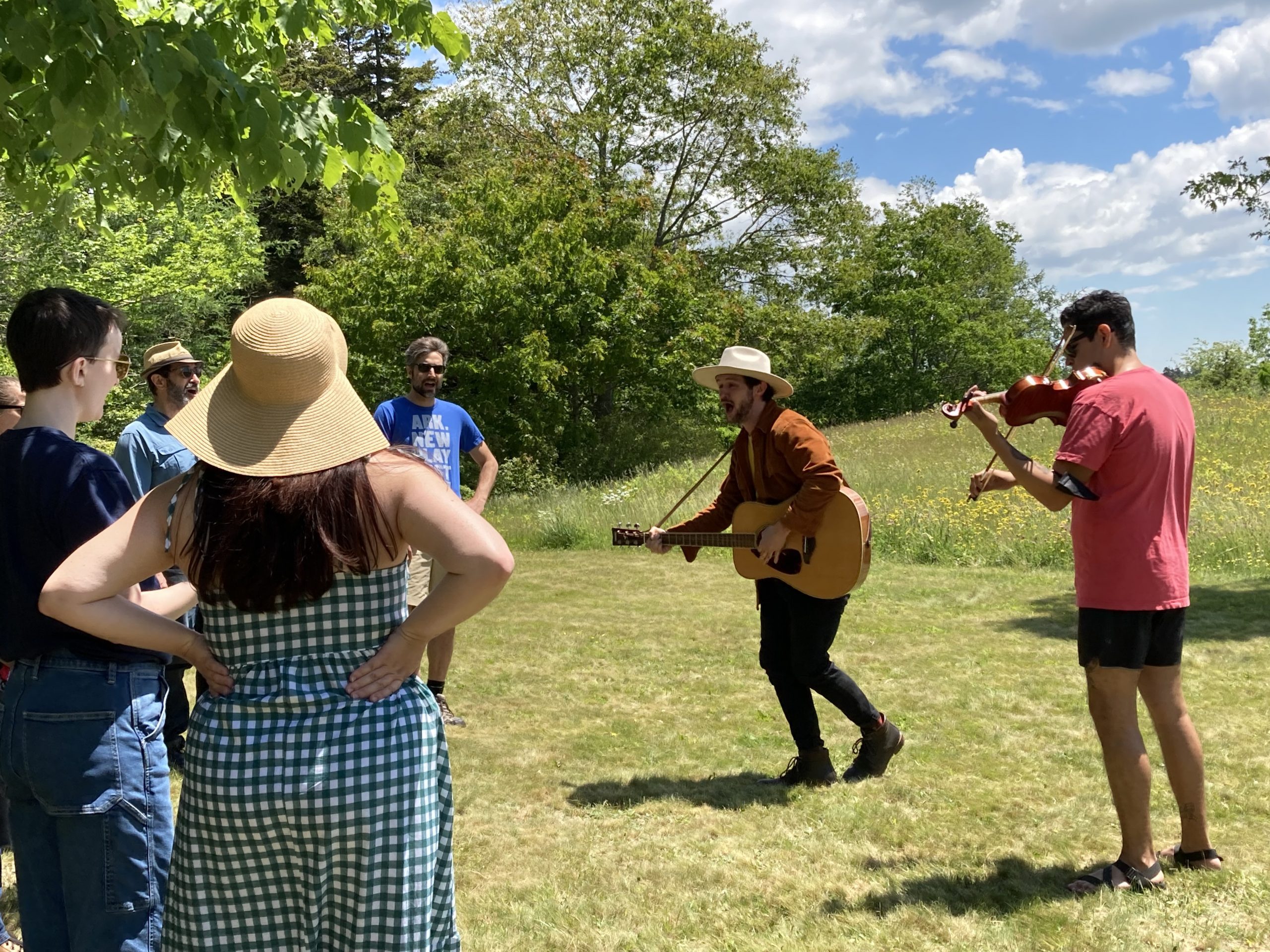 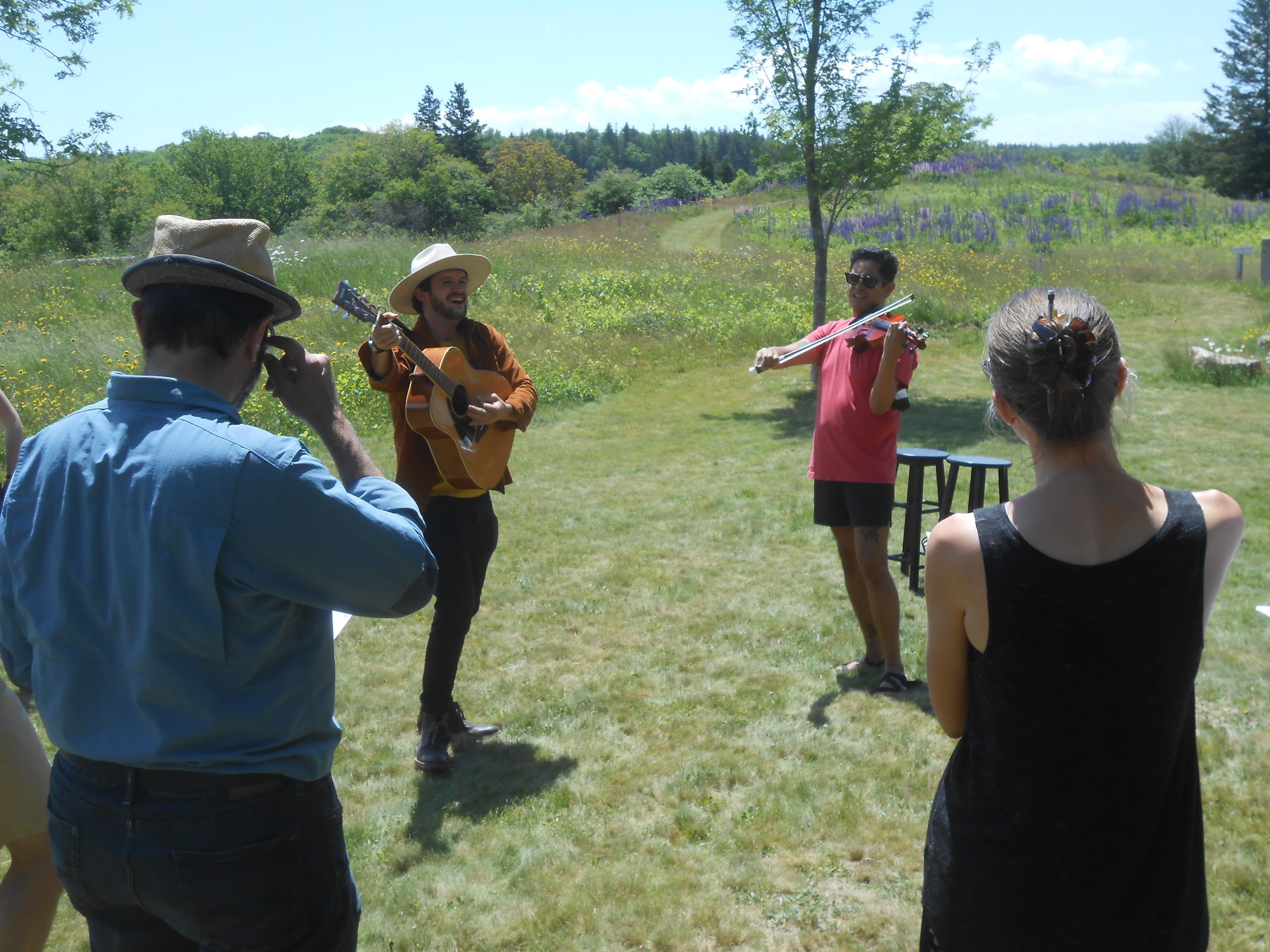